A wonderful aspect of being in Panama is the number of brightly colored bird species. While many of our clients choose to move to Boquete for lifestyle, economic or political reasons, some come for the birds. Ardent birders find Boquete a paradise. We’ve had several couples cite the many birds as a main attraction for moving to Boquete. Those newcomers often provide us with a specific altitude range preference for their new home where they can maximize sitings for the kinds of birds they prefer to see as different altitudes attract specific species.

Any mention of birding in Boquete must include the Resplendent Quetzal.   Most respectable birders place the Quetzal high on their must-see list.  Boquete is a dependable Quetzal habitat.  Tour guides can take visitors to known Quetzal nesting areas especially at particular times of the year. Though you might happen upon one from time to time on high altitude Boquete hiking trails.

The below photos are of an adolescent quetzal that had found it’s way into Chiriqui River Rafting’s office on Avenida Central.  The kind folk there called a local animal rescuer who set it free in the Bajo Mano area the next day.  It was wonderful to see.  Adult quetzals have even more intensely colored and longer plumage. 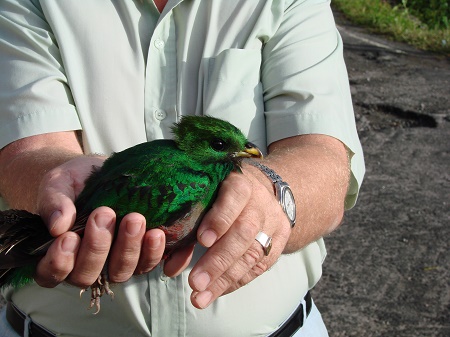 “Birder Finds Panama Packed With Species, But No Harpy Eagles

There are more species of birds in Panama than all of North America. NPR’s Scott Simon speaks with Ray Brown, host of the radio program Talkin’ Birds, who just returned from the country.

SCOTT SIMON, HOST:Time now for some talking birds.(SOUNDBITE OF RADIO SHOW, “RAY BROWN’S TALKIN’ BIRDS”)UNIDENTIFIED ANNOUNCER: Ray Brown’s Talkin’ Birds.SIMON: Ray Brown, host of the radio show and podcast Talkin’ Birds, has just flown back from doing a show in Panama and boy, are his arms tired.Thanks for being with us, Ray. I love that joke.RAY BROWN: Yes. I’ll use it later.SIMON: Thank you.He’s at the studios of WGBH in Boston.Ray, I’ve been to Panama. It’s a very narrow country. How do they fit in so many birds?BROWN: Well, fortunately they have a lot of forests there, lots of rain forests. So there are big national parks that offer lots of room for lots of birds. In fact, I think about as many species there in Panama as in all of North America, some 900-plus.

SIMON: What are some of the highlights?

BROWN: Well, you know there’s a book that I read years ago called “Life Above The Jungle Floor.” This happened to be in Costa Rica, but it was a similar environment. One of the birds that they were seeking and finally found was called the great potoo. I know that sounds like a creature of mystery or maybe one of Johnny Carson’s characters on the old “Tonight Show,” but we finally saw this third.

SIMON: You know, you can tell he is a master of camouflage because he sounds like one of our producers at his desk kvetching over a mistake I made.

BROWN: Well, you know, they actually are related to the whippoorwill and these birds are sometimes called goat suckers based on the fact that farmers would see these birds with their – they have large gaping mouths. They’d see them around their barns and they would put two-and-two together and get five, and assume they were sucking milk from their goats. They actually eat insects and bats.

SIMON: But you didn’t, I’m told, see the harpy eagle, which is Panama’s national bird, right?

BROWN: It is, yeah. We didn’t really expect to see it. It’s a bird that not many people see. It’s a very secretive bird in the deep forest, even though it is a gigantic bird. It’s the biggest and most powerful raptor in all of the Americas. In fact, the females can weigh as much as 20 pounds. You can picture that like a Thanksgiving turkey, I guess. The males are only about half that size, but enormous birds. But, unfortunately a lot of habitat destruction has reduced their numbers even more. So they’re described as nearly threatened in much of South America, and in Panama, critically endangered. That name by the way, the Latin name Harpia harpyja, comes from Greek and Roman mythology. Harpies were wind spirits with the body of a bird and the face of a woman.

SIMON: Ray, before you go, there’s some audio we’d like to play. You spoke with a man named Carlos Betancourt, a senior guide at Panama’s Canopy Tower. He says he was about 9 years old and remembers running from the forest into the house with some news for his grandmother.

CARLOS BETANCOURT: I said Grandma, Grandma, Grandma – look what I got with my slingshot. First shot, Grandma, and I got this. So next question she asked me is like, how do you want it, to cook this bird for you? I said, Grandma, I don’t want to eat this bird. She said, then why you kill it? It was a red-legged honeycreeper. It’s a very small bird. So Grandma peeled it off and deep-fried it and put in front of me on a plate. And she didn’t make me eat it, but I got the lesson. She told me, Carlos, if you’re going to kill something in the forest or in the wildlife, it’s because you really need it.

BROWN: You know, I was so amazed and impressed by all of the guides there and I asked them each how they began birding. That was Carlos’s story. And they all have wonderful stories about being very young and being introduced to birds in all kinds of different ways.

SIMON: Ray Brown is the host of Talkin’ Birds. You can listen to his show from Panama at talkin – no G – birds.com.

Ray, talked to again, thanks so much.