Panama’s nearly 6% GDP growth rate is the highest by far in all of Latin America.   The economy is projected to accelerate in 2017 and 2018, and those increases are expected to far exceed all other countries in the region from Mexico to all of South America.

Panama continues to be a huge economic success story with steady growth that continued even though the worst of last decade’s world economic recession.

With the Panama Canal expansion, continued increases in foreign direct investment, decreasing Panama government debt, and so many other positive factors, Panama is poised to become the stand-out economy of Latin America for the next 50 years.

Excerpts from July 12, 2016 report on Panama from Focus Economics, Economic Forecasts from the World’s Leading Economists

“Panama has been one of the fastest growing economies in Latin America over the past decade, with real GDP expanding an average of 8.4% between 2004 and 2013. Moreover, Panama performed relatively well during the global financial crisis, including 4.0% growth in 2009 when many other countries in the region suffered a contraction. The Panamanian economy accelerated in the following years, reaching double-digit growth rates in 2010 and 2011.”

“…the opening of the expanded Panama Canal on 26 June guarantees that the economy will be resilient. The government estimates that fiscal transfers from the Canal will increase 45% starting in 2017 and that investment in related infrastructure such as ports will increase by 40% in the medium term. In a special report assessing the impact of the expanded Canal, Fitch Ratings said that increased earnings from the Canal offer a unique opportunity for the government to reduce public debt levels and consolidate its fiscal position. The agency noted that a credit rate hike could take place if the government achieves the two aforementioned points.”

“The Panama Canal and use of the U.S. dollar have promoted the strengthening of a globally-oriented services economy. The Panama Canal is essential to global trade and accounts for almost 10% of the country’s GDP. Other important components of the service economy are the Colon Free Trade Zone (CFZ), which is the second largest free port in the world, and the Trans-Panama Pipeline, which allows for the transport of crude oil between the Pacific and Atlantic coasts. The license and registry of the Panama flag to merchant ships is another source of economic activity. Panama also has a large logistics and storage services sector, as well as a modern banking and insurance industry. The agricultural sector has lost importance over the years, accounting for less than 10% of GDP today.”

“While the Panama Canal and related activity were historically the main economic engines, growth is now also being driven by a modern banking and financial services sector. This sector, which features more than 80 established banking and financial institutions, including insurance and re-insurance companies, has expanded greatly thanks to the free flow of capital, adherence to international regulation standards, the dollarized economy and a stable political environment”

“The Panamanian government has promoted economic growth over the past decade in large part through open market policies and by supporting free trade. Moreover, the government actively encourages foreign direct investment through lax regulation and by guaranteeing ease of business.”

The following is from a June 2016 report from the World Bank: 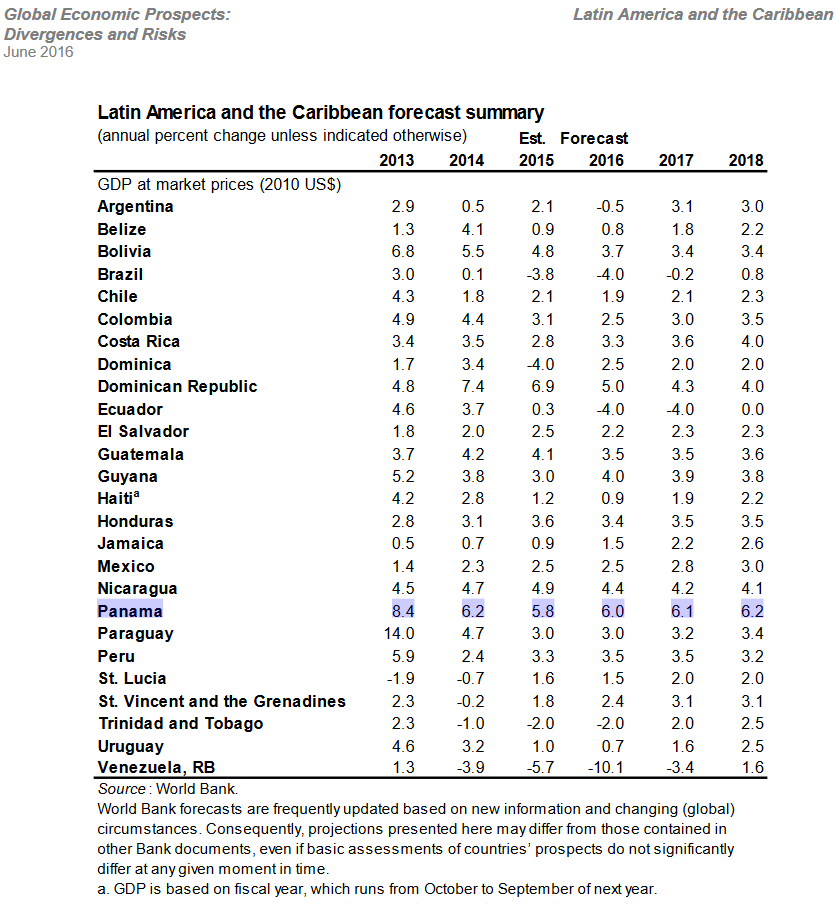