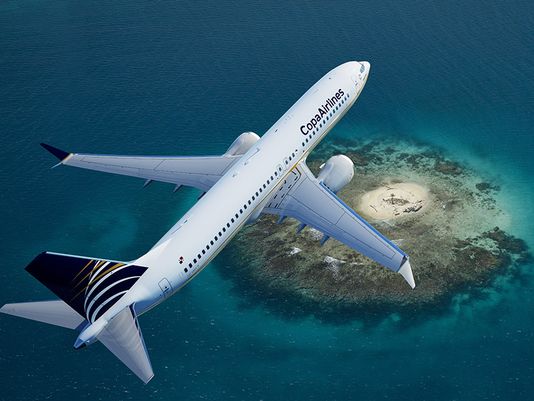 Copa is really on the move.  It seems every few months there is a big expansion announcement from the Panamanian airline. The purchase of billions in new planes is a huge move for the growing airline.  Expect to keep hearing more from Copa.  Most of the news will be in the form of direct flights and Panama terminal expansions to accomodate the growth.

The most recent addition to the U.S. direct flight list is New Orleans.  Other recent direct flight additions include Denver, Las Vegas, Chicago, and Boston.  And we are very excited about the addition of Copa flights to David, Panama.

Book flights from Copa to David or Panama City or on the Copa website from all of the cities at the bottom of this post. The list is valid as of 4/13/15.

Flights to David include a change of planes at the same airport (Tocumen) in Panama City.  While many of these destinations have direct flights to Panama City, some of those listed include stops on the way.

Boeing Co. secured an order to sell 61 737 single-aisle jetliners to Panama’s Copa Airlines in a deal valued at $6.6 billion, the largest commercial transaction between companies from the two nations as President Barack Obama attends a political summit in the Central American nation.

The Boeing 737 Max 8 and Max 9 planes will help Copa upgrade its existing fleet of older 737 models, the airline said Friday in a statement. For Boeing, the transaction would more than double sales of 737 Max planes so far this year.

The announcement was made as both Boeing and Obama look to Latin America to boost their fortunes. Obama lauded the deal at a signing ceremony in Panama for the Summit of the Americas, where his interaction with Cuban President Raul Castro is set to be a highlight of the event. Both Boeing and France-based Airbus Group NV have raised production of narrow-body aircraft, which form the centerpiece of most global fleets.

Obama and Panamanian President Juan Carlos Varela stood behind executives from Boeing, Copa and General Electric Co.’s aerospace unit as the order was signed. While they made no formal remarks, they chatted with attendees about the jobs effect of the deal.

The Max 8, the most popular of three versions of the new plane, has a catalog price of $106.9 million, according to Boeing’s website. The $6.6 billion figure is based on list prices, although airlines usually get a discount. Boeing spokesman Jim Proulx declined to discuss financing, including whether the U.S. Export-Import Bank played a role.

“Latin America is a really important region for Boeing,” Proulx said in a phone interview. “We definitely want to play a role in providing the airplanes to support their growth.”

Obama is seeking to reassert U.S. influence in Latin America and restore goodwill with many of the 35 nations represented at the summit, which in recent years has left the U.S. isolated over its policies toward Cuba. As the communist nation attends the gathering for the first time, Obama’s move to interact with Castro has won him accolades from other Latin American leaders.

Obama will have several opportunities to interact with Castro during the summit, beginning Friday when the heads of government are scheduled to attend an arrival ceremony, a ceremonial photo and a formal dinner on Saturday.

Boeing lands blockbuster order for 61 of its 737 jets

Boeing has landed a blockbuster 61-jet order from Copa Airlines of Panama. The order would be worth $6.6 billion at list prices, though big airlines receive significant discounts on such orders.

The deal was announced on the sidelines of the Summit of the Americas, a gathering of North and South American leaders that’s being hosted this year in Panama’s capital city.

Copa CEO Pedro Heilbron and Boeing CEO Jim McNerney signed off on the order for 61 Boeing 737-MAX jets at a Friday ceremony attended by President Barack Obama and Panamanian President Carlos Varela. Trade officials said the deal is the biggest ever between U.S. and Panamanian companies.

Copa has long been a staunch Boeing customer. The carrier’s current fleet of 98 aircraft includes 72 Boeing 737 jets of various models, according to the carrier’s website. The remaining planes in Copa’s fleets are mid-size E190 jets made by Brazilian manufacturer Embraer.

The Copa order announced Friday with Boeing is for the 737 MAX, a “next generation” update to Boeing’s best-selling model. The aircraft, scheduled to debut in 2017, includes newer fuel-efficient engines as well as other design updates.

An analysis by The Seattle Times shows Copa’s new 61-jet order comes while it also moved to cancel an existing order for five current model 737s. “So the net new order is for 56 airplanes,” the Times writes. The newspaper suggests the actual value of the deal for 56 planes is be about $2.9 billion with “standard discounts,” according pricing data the Times attained from aircraft valuation firm Avitas.

Copa has been on a growth spurt in recent years, capitalizing on the strategic position of its Panama City hub to expand both within Latin America and on routes to the United States. The airline bills its Panama City base as the “Hub of the Americas.”

Copa’s new order includes both the 737 MAX 8 and 737 MAX 9 versions of the jet. Copa says it will use the planes both to replace existing older planes in its fleet and to “support the carrier’s plans for strategic growth.”

“The Next-Generation 737 is the backbone for our fleet today,” Copa CEO Pedro Heilbron says in a statement.

Heilbron adds that “our order for the 737 MAX shows our continued commitment for the future to bring people together across all of the Americas using the most modern and efficient airplanes in the sky as well as our Hub of the Americas, in Panama City.”