Obama is coming to Panama – The Big Focus of the Summit? Cuba (& Venezuela) 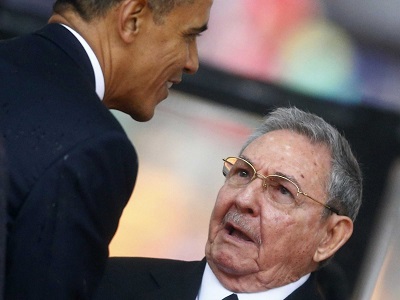 The world’s attention will be turning to Panama next month as the Summit of the Americas takes place. Most of the heads of state for all of the democratic countries of the Western Hemisphere will be in attendance.

But all eyes will be on President Barack Obama and Raul Castro.

You can expect mucho press about the event with lots of photos and video of Obama and Castro shaking hands. You might hear the word “historic” a lot.

And you will also hear lots of comments about the amazing success story of Panama, the glistening new skyline, the crackdown on corruption, Panama’s prominence as the new hot tourist destination and the flow of North American and European retirees into the country.

In the meantime, as we build up to the Summit, the U.S. and Cuba will be jostling over Venezuela. Venezuela’s violent crackdown on protesters and political opponents has been getting serious heat from the U.S.. The U.S. has declared Venezuela a threat to U.S. national security and slapped sanctions on seven key perpetrators of human rights violations and violence against peaceful protesters. The sanctions do not apply to the energy industry or the broad economy.  Venezuela is a major supplier of oil to the U.S.

Cuba has, of course, ardently defended their main trading partner and key ally. That is unlikely to stop the thaw though. The U.S. is committed and Cuba has too much to gain.

The recent thawing of relations between the U.S. and Cuba occurred after Panama’s decision to invite Cuba to attend this Summit.

When Panama invited Cuba, controversy ensued. After vigorous protests from the U.S. State department and vocal Senators to Cuba’s participation, the U.S. shifted gears. Suddenly, the U.S. policy of isolating the regime changed to engagement.

With Venezula’s Maduro, Castro and Obama all attending, the Summit will attract a lot of international attention.

The Summit takes place April 10 – 11, 2015. In addition to all of the great press for Panama, plan for possible traffic and travel disruptions in Panama City around those days. It will be a good time to visit Boquete.

Obama hopes to reopen US embassy in Cuba before April summit

Barack Obama has said he hopes the US will open an embassy in Cuba ahead of an Americas summit in April, one of the first major steps in restoring diplomatic relations between Washington and Havana.

The US president emphasized that considerable work remains to be done as the two countries seek to re-establish diplomatic ties, but said in an interview with Reuters on Monday that he hopes recent negotiations can lead to the embassies reopening in the coming weeks.

Both Obama and the Cuban president, Raúl Castro, are expected to attend the Summit of the Americas, which is set for 10 and 11 April in Panama City. Obama said before the summit: “My hope is that we will be able to open an embassy, and that some of the initial groundwork will have been laid.”

“Keep in mind that our expectation has never been that we would achieve full normal relations immediately,” Obama said. “There’s a lot of work that still has to be done.”

The US and Cuba announced in December that they plan to restore diplomatic relations after severing them in 1961. Reopening embassies in each country is expected to be the first major step to demonstrate the renewing of diplomatic ties.

While the US is pushing to open the embassies, the Cuban government has balked at the US’s classification of the country as a “state sponsor of terrorism”. The US imposed this status in 1982, but it is currently under review by the State Department.

On Friday, delegations from both countries met in Washington for the second round of negotiations.

Josefina Vidal, the Cuban foreign ministry’s head of US affairs, said after the meeting that removing Cuba from the list is “not a precondition” for opening the embassies.

“It is a matter of sheer justice,” Vidal said. However, she added that “we have not established links between opening embassies and the removal from the terrorist list.”

About the Summit on Wikipedia

More about the Summit and the Obama Castro photo

About the Argument between the U.S. and Venezuela