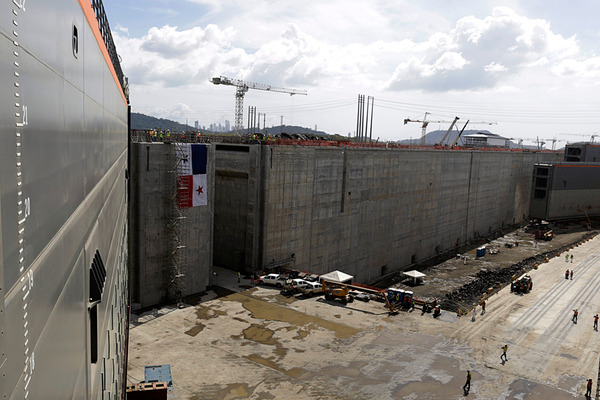 Panama’s Canal Authority has altered the rhetoric on the proposed Nicaragua Canal. The Nicaragua Canal plan with connections to China, has been mostly dismissed by Panama until now. A Canal V.P. is now saying they take the project seriously. Perhaps it was not politically palatable to be so dismissive of the project or perhaps the Panama Canal people have more information about it now.  Time will tell.

In the meantime, there has been talk of another expansion of the Panama Canal beyond the current one that is due to be completed in 2016. However, don’t expect that next project to start soon. The last one involved a national referendum and years of planning.

“In late December, Nicaragua inaugurated work on what it says will be a waterway able to handle the world’s largest ships passing between the Atlantic and the Pacific. The project comes as Panama doubles its own canal’s capacity.

Panama City — When it comes to interoceanic canals, Panamanians speak with a century of experience. So as nearby Nicaragua moves ahead with a plan to build what it claims would be a bigger, better canal, some Panamanians look on with interest and puzzlement.

“We take the possibility of construction of a canal in Nicaragua very seriously,” said Francisco J. Miguez, executive vice president for finance and administration of the Panama Canal Authority, the waterway’s operator.

The Nicaraguan plan is feasible, Miguez said. “We find that, technically, the project can be built … with enough resources and time,” he said.

Miguez spoke in a measured voice in his office at the imposing headquarters of the Panama Canal, set on a commanding hill. He didn’t display undue concern that a clash of rival canals on the Central American isthmus might be in the offing, one that would have an impact on US consumers and businesses reliant on global trade.

In late December, Nicaraguan President Daniel Ortega and Chinese telecom entrepreneur Wang Jing formally inaugurated work on what they said would be a 173-mile-long waterway capable of handling the world’s largest ships as they pass between the Atlantic and Pacific oceans.

Nicaraguan lawmakers in 2013 granted Wang’s Hong Kong-based HKND Group a 50-year concession to build a canal in return for a payment of $10 million a year once it’s operational. The group was also given a green light to develop ports, an airport, roads, and a railway even if the canal doesn’t get built.

The Nicaragua project comes as Panama is doubling its canal’s capacity, adding a third set of locks to accommodate ships more than twice as big as in the past. The $5.25 billion expansion is 85 percent complete and expected to be operational early next year.

Outside maritime experts say Panama has reason to be concerned about an eventual rival canal in Nicaragua.

“If it actually gets built, and it is run in a reasonable manner, they are going to get business,” said Richard Wainio, the former director of the Port of Tampa, in Florida, and a shipping consultant. “People will use it, and Panama will lose business.”

But Miguez said Panama Canal experts suspected Nicaragua was mistaken in thinking it would draw supertankers and container ships that were larger than those that would fit through the expanded Panama Canal.

“Our preliminary assessment is that there is not [a market]. You don’t see trends right away going to bigger than 14,000-container vessels. There’s no trend moving in that direction,” Miguez said.

Panama Canal Administrator Jorge L. Quijano said in mid-2014 that the expansion would allow the passage of 98 percent of the current world fleet of ships.

Basically, the two countries are wagering on whether cargo ships will grow ever larger and trade routes will adjust as ports invest in deeper channels and bigger gantry cranes to handle the super ships.

“It’s a vessel that provides very good economies of scale. It’s an efficient vessel. And it’s also a flexible vessel. That means it can be loaded and unloaded within reasonable times in ports,” he said.

“When you get to really, really big vessels … it’s a matter of, can you fill them? Because when business is booming, when the economies are growing, it’s easier to fill a 14,000 (container) vessel or more,” Miguez said.

“But when you have, you know, economies that are not doing well, then sometimes those vessels become less flexible, less profitable, if you cannot fill them quickly to keep services day in, day out,” he said.

A project description released last month by the HKND Group said the Nicaraguan canal would handle gargantuan future ships hauling up to 25,000 20-foot containers or monster bulk carriers the length of 12 football fields.

A US shipping expert questioned whether such large ships would find profitable routes moving through a potential Nicaraguan canal.

“I don’t think you’ll ever see grain moving in that size ship,” said James R. Brennan, a partner at Norbridge, a Concord, Mass.-based consultancy for shipping companies and ports.

But factors such as financial feasibility may take a backseat to overarching goals for industrial development and global standing, if it turns out the Chinese government is behind the Nicaraguan canal, Brennan said.

“I think it’s very, very difficult to bet against the Chinese government if they want to do something,” Brennan said.

The US government has been largely silent on the project, and Miguez said that was likely because a second trade route wouldn’t hurt US commercial interests.

“Remember, about 60 percent or more of goods that move through the Panama Canal either come or go to the United States. So if the United States has a second route available for them, it means they have redundancy and more reliability,” Miguez said.

If shipping trends head toward larger ships, Miguez said, Panama would be ready to build a fourth lane on its canal that would accommodate them.

“If the demand exists, we will go to a fourth set of locks,” he said.”