Outstanding Value Property for Sale Near Boquete and David, Panama – Over 44 Acres of Relatively Flat Land
$275,000

The allure of retirement in an exotic tropical destination is something many people dream of, but until recently, few people had the courage and vision to do.  That is changing.

What was once considered unusual and odd is now hip.  For some the move is a temporary, yet indefinite adventure – to relocate and have a wonderful vitalizing multi-year experience in a new land.  For most, the relocation is permanent with no intentions of turning back to the life of the past.

Boquete is considered one of the world’s best retirement destinations and consistently featured in the international press.  With all the new amenities, well-developed expat community, improved infrastructure, excellent restaurants and nearby retail stores, Boquete makes the decision to retire to a new land much easier to embrace.

This article about one of the pioneering early arrivals features Richard Detrich, an esteemed local resident, speaker and author.

Everyone dreams of retiring early, but it can become a reality with persistent saving and smart planning. 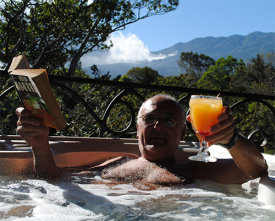 If you manage your finances properly, you can trade in the office for the beach at a young age.

Many Americans fear they’ll never be able to retire, but there are those who are able to retire early, saying goodbye to the rat race before they hit 60 and pursuing their true passion. For many, that passion includes continuing to work, but at their own pace and doing something they truly enjoy.

From Real Estate to Real Adventure

Richard Detrich never expected to retire. He started his career as a pastor, ran a cruise travel agency, worked in e-commerce and ended up selling real estate, a career he thought he could pursue indefinitely. Detrich and his wife, who worked for the county health department, owned a nice house overlooking the water in Ventura, California. But her stressful job was endangering her health, and they started thinking about a change.

“I had always thought I would work until I dropped,” he says. But that was before Detrich “got tired of the traffic, the rat race, being a slave to my cellphone. … There comes a time when you need to cash in your chips and leave the casino.”

When he was 62 and she was 55, they sold their house, left their jobs and moved to Boquete, Panama. Ten years later, he has written several books, including “The New Escape to Paradise: Living and Retiring in Panama,” and interrupts his retirement to lecture on cruise ships for several months each year. His wife, Nikki, runs a small coffee farm and does volunteer work.

Living in Ventura, he estimates that 39 percent of their income went toward their home and another 40 percent toward state and federal taxes. Living now in the mountains of Panama, they don’t pay for heat or air conditioning at the dream home they built on their coffee farm. And their water bill is $60 a year. As U.S. citizens living abroad, they can exclude up to $100,800 in earned income from federal taxes.

For the Detrichs, the key to retiring early was cutting expenses as well as trading an expensive home for a cheaper one. When they moved to Panama, he estimated that they could live for 40 percent less than they did in California. Costs have risen, but he estimates they still spend 30 percent.

His Social Security income and his wife’s pension are supplemented with income from their coffee farm, his cruise ship lectures and books and their investments. That’s enough to live well in Panama.

They hadn’t planned to enter the coffee business and, in fact, started their Panama lives in a gated community before they moved to the farm. “It’s given us entrée into the local community that we wouldn’t have had otherwise,” he says, though he still struggles to communicate in Spanish.

“Our only regret is that we did not do this sooner,” he says. “Sometimes you have to dare to dream and start looking.”

Doug Nordman didn’t set out to retire at 41. As he got ready to leave his military career with the U.S. Navy’s submarine force after 20 years, he surveyed other career options. But after years of 50- to 60-hour weeks or being on-call for weeks at a time, the last thing he wanted to do was essentially the same work in the civilian sector.

“There was a certain amount of burnout,” Nordman says. “I don’t know what I want to do when I grow up, but it wasn’t this.” He remembers thinking, “I just really want to go surfing for a while.”

He and his wife, Marge, a Navy meteorologist/oceanographer, had a 9-year-old daughter, Carol, who they wanted to spend more time with. After doing some math, he realized they could afford to live on his military pension and Marge’s earnings with the U.S. Navy Reserve, plus investment and rental property income.” continued