Forbes: “Panama: Achieving Prosperity and Equity at the Crossroads of the World” 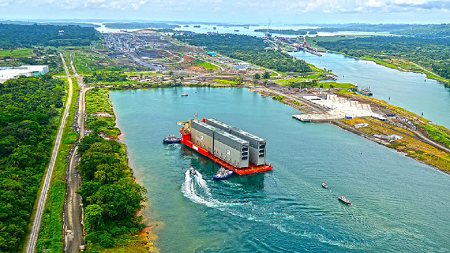 Forbes starts this article with  “Panama is on a roll these days.”  This interview with eloquent Vice President Isabel de Saint Malo de Alvarado has a few notable mentions.

Panama shined as expected at the recent Summit of the Americas.

Panama is engaged in  “new mega-projects in power-generation, fuel-storage, logistics, and transportation, all tied to the Canal expansion. Among the project’s biggest effects will be the increased shipments of American natural gas, propane, and petroleum liquids to Asia.”

Interestingly, the article does not mention the enormous strides and bold moves being taken by the current Panamanian government against corruption.

“Panama: Achieving Prosperity and Equity at the Crossroads of the World”

“Panama is on a roll these days. The Latin American economic powerhouse recently concluded a historic gathering of heads of state from across the hemisphere including U.S. President Barack Obama and Cuban President Raul Castro—and recently marked the 100-year anniversary of the Panama Canal, an engineering marvel that created a literal and symbolic link between north and south, east and west. Panama’s new President, Juan Carlos Varela Rodriguez, is committed to completing a long-planned expansion of the Canal, while stoking the fastest growing economy in Latin America and developing his country by increasing education and economic opportunity. Panama’s Vice President and Foreign Minister Isabel de Saint Malo de Alvarado spoke to Forbes about The Summit of the Americas and what’s next for her fast-moving country.

Forbes: Panama hosted The Summit of the Americas earlier this month. Are you pleased with the result?

VP: Absolutely. Panama was the host and facilitator of this historic meeting. The Summit of the Americas gave way to a new era of engagement and respectful dialogue in the region. For the first time since the inception of this forum in 1992, every nation in the region participated. And with everyone at the table, all the issues were on the table: health, education, climate change, energy, security, immigration, citizen participation and democracy. There was progress on all of these issues. In addition to the Summit, the Civil Society Forum played an important role. It reflected the broad diversity of voices and ideas of the region as a whole, an important step in the strengthening of democratic culture in the continent.

At a national level, the Summit was also an opportunity for Panama to shine. We are very pleased that leaders and delegations from the region were able to experience what Panama has to offer as a country and as a regional hub in terms of connectivity, logistics, and opportunities.

Forbes: The theme of the Summit was “Prosperity with Equity: The Challenge of Cooperation in the Americas”. What does that mean as a practical matter?

VP: It means that we must work together and join efforts to create more opportunities for the people of the Americas. By 2020, Latin American GDP is expected to reach $10 trillion—double that of 2010—with 640 million active consumers. However, this prosperity has not been sufficiently and broadly shared by the people. That is where the demand for equality begins. Equality is a necessity and a condition for the sustainable growth of our region and for our peace and stability.

Forbes: Were you worried everyone would focus only on “the handshake”?

VP: The handshake was symbolic of our discussions, which centered on how the hemisphere needs to work together. I think the media and the people in the Americas saw the bigger picture, that we are all engaged in a common goal: the pursuit of prosperity and inclusion for all our people. We are very proud of the role Panama played in facilitating dialogue and in providing a platform for the productive and honest conversation.

Forbes: How are plans for the Panama Canal expansion proceeding?

VP: We have around 90 percent of the work completed and the expansion is scheduled to be ready in the spring of 2016. The Panama Canal expansion is a $6 billion project that will double the amount of cargo that crosses the Isthmus of Panama to 660 million metric tons per year. The expansion project is pushing the country in new directions and, will continue to cement Panama as the crossroad of the world. There are new mega-projects in power-generation, fuel-storage, logistics, and transportation, all tied to the Canal expansion. Among the project’s biggest effects will be the increased shipments of American natural gas, propane, and petroleum liquids to Asia. It’s a truly transformational project for our hemisphere and the world.

Forbes: What keeps you up at night on the foreign policy side?

VP: We are moving in the right direction in terms of our foreign policy priorities, playing our historic role as a country that promotes dialogue and consensus building among nations. The world saw this on display during the Summit of the Americas. We are also framing our foreign policy in terms of the global development agenda, which is very closely tied with President Varela’s domestic priorities for Panama. We are working to play a more active role in international organizations and in issues related to the development agenda.

A bigger challenge is our contribution to the peace and stability within our region and the world. The respect for human rights and democracy are critical challenges that we are responsibly facing through different initiatives, in alliance with other countries.

We do realize, as was evident in the Summit of the Americas, that our region is not afflicted by issues of extreme intolerance that unfortunately take place in other parts of the world; but we would like to contribute with lessons that our countries have learned in the past decades. Panama has had the experience of solving critical issues through dialogue and we are willing and ready to share these experiences. And this relates to our decision to invite all the countries of the region to the VII Summit of the Americas in Panama, which marked a new era of engagement and renewed dialogue between the nations of our hemisphere.”