Life, Death, and Gold in Ancient Panama on exhibit in Philadelphia

Regarded as humble and soft-spoken, the University of Pennsylvania archaeologist J. Alden Mason (1885-1967) groused privately when his 1940 expedition to Panama’s Sitio Conte stalled. “Work somewhat delayed for want of shovels; comfort impeded for lack of chairs, benches, tables, etc.,” he confided in his journal in January of that year. 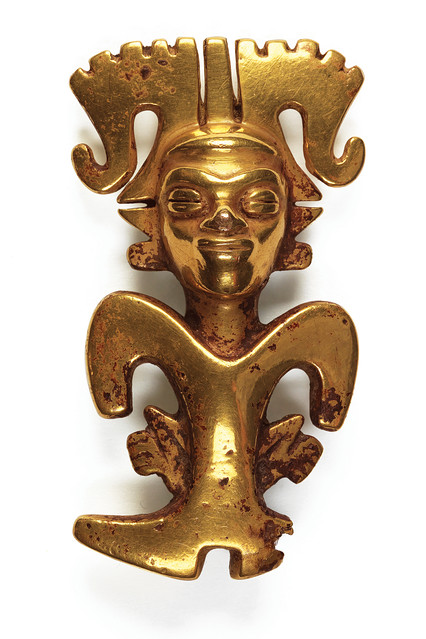 But just two weeks later, Mason announced the dig’s “first good polychrome pot.” By early April, his mood had turned exultant: His team was unearthing a three-layered tomb (“Burial 11”) containing the remains of 23 people, a great hoard of gold, and other artifacts associated with an elite burial—“one of the richest finds in American archaeology,” he predicted.

Mason’s notes, immersing visitors in the excitement of archaeological discovery, help animate “Beneath the Surface: Life, Death, and Gold in Ancient Panama,” at the University of Pennsylvania Museum of Archaeology and Anthropology. His finds have since become famous: They starred in a previous Penn traveling exhibition, “River of Gold,” which made its debut in 1988 and was remounted in 1992 and 2007.

Here, once again, is that gold: embossed plaques with fantastical human and animal motifs; beads, rods, nose clips, belts and necklaces; tiny animal figurines combining gold with whale ivory and resin, and an exquisitely crafted jaguar pendant whose back is represented by a massive emerald. All are credited to a people known as the Coclé, who lived on the banks of the Rio Grande de Coclé about 100 miles southwest of Panama City, and fashioned these emblems of rank and power from 700 to 900.

For this latest exhibition, the museum also has dipped into its storerooms to assemble—or, in some cases, reassemble—an assortment of ceramic pots and serving vessels, with orange, red, purple and black ornamentation that is both figural and abstract.

The pots feature stylized sculptural forms, including shamanistic human effigies, and images of snakes, turtles and various composite creatures, sometimes seen from multiple perspectives. At once fanciful and utilitarian, the ceramics offer insights into Coclé craftsmanship and imagination, as well as the ecology of the area.

The exhibition narrative introduces an array of characters: the artistically sophisticated people who created these objects, the archaeological team that found them, the scientists engaged in interpreting them and the indigenous Panamanian people, the Kuna, whose contemporary crafts incorporate similar motifs. “Our approach is what we call ‘peopling the past,’” Clark Erickson, the exhibition’s lead curator and the curator-in-charge of the Penn Museum’s American Section, said at a press preview.

He and his colleagues have sought to contextualize the artifacts through the evocative use of design. “Beneath the Surface” occupies a single, compact gallery, whose dim, tomblike interior space and reddish-brown walls are meant to suggest that visitors are underground.

The first image we encounter is a life-size representation of the so-called Paramount Chief, one of two central figures in Burial 11, adorned with a nose clip, plaques, pendants, a headdress and belt—all of the gold-silver-copper alloy typical of Coclé manufacture. This is the exhibition’s way of underlining that its glittering objects are best understood not in isolation, but in relation to a people and culture.

To the right of the entrance are mementos of the Mason expedition, which followed 1930s digs at the same site by a Harvard team. Both groups were invited to the area by the Conte family, the landowners, after a 1927 flood had scattered golden beads along the river banks.

From its archives, the museum has produced photographs, notes, sketches, Mason’s L.C. Smith and Corona typewriter—and, best of all, color motion-picture footage of the dig, projected continuously onto one gallery wall. “For its time,” Mr. Erickson says, the expedition was “pretty state of the art.”

The centerpiece of the show is an attempt to re-create the three-tiered layout of Burial 11—layering that Mr. Erickson says reflected the stratified nature of Coclé society. The exhibition design positions several objects—primarily jewelry and ceramics—in the jumbled way they would have appeared to Mason’s team.

Was the Paramount Chief buried with sacrificed attendants, slain warriors or enemy captives? More than a millennium later, no one can say. Of special interest, though, is a vitrine containing items associated with an elite woman, including gold sequins in the shape of shark teeth and a set of dog molars probably worn as part of an apronlike ornament. “As many as 70 dogs were sacrificed” for that single piece, Mr. Erickson says.

On each side of the Burial 11 exhibits, an excellent touchscreen interactive, with video, photos, diagrams and text, allows visitors to study details of the burial, and to read Mason’s journal. The drawback to this mostly inspired display is that it can be hard to match the labels and objects, and to examine individual artifacts closely.

That is not true elsewhere in the gallery, where smaller vitrines exhibit ceramics, more gold and other crafts. The labels are concise and professional; they explain Coclé metallurgical techniques and the inventive, interlocking composite designs they favored. But the exhibition also suggests how little we really know about the culture, which disappeared around 1000 and left no written language.

A series of captioned videos, featuring Mr. Erickson, Julia Mayo (who has excavated El Caño, a site near Sitio Conte), Richard Cooke of the Smithsonian Tropical Research Institute and others, further explores questions about Coclé society. But these academic experts often meander and could have benefited from succinct scripting. And the captions are filled with embarrassing misspellings that an editor should have fixed. These are the lone missteps in an otherwise meticulous and rewarding show.

Ms. Klein is a cultural reporter and critic in Philadelphia and a contributing editor at Columbia Journalism Review.”