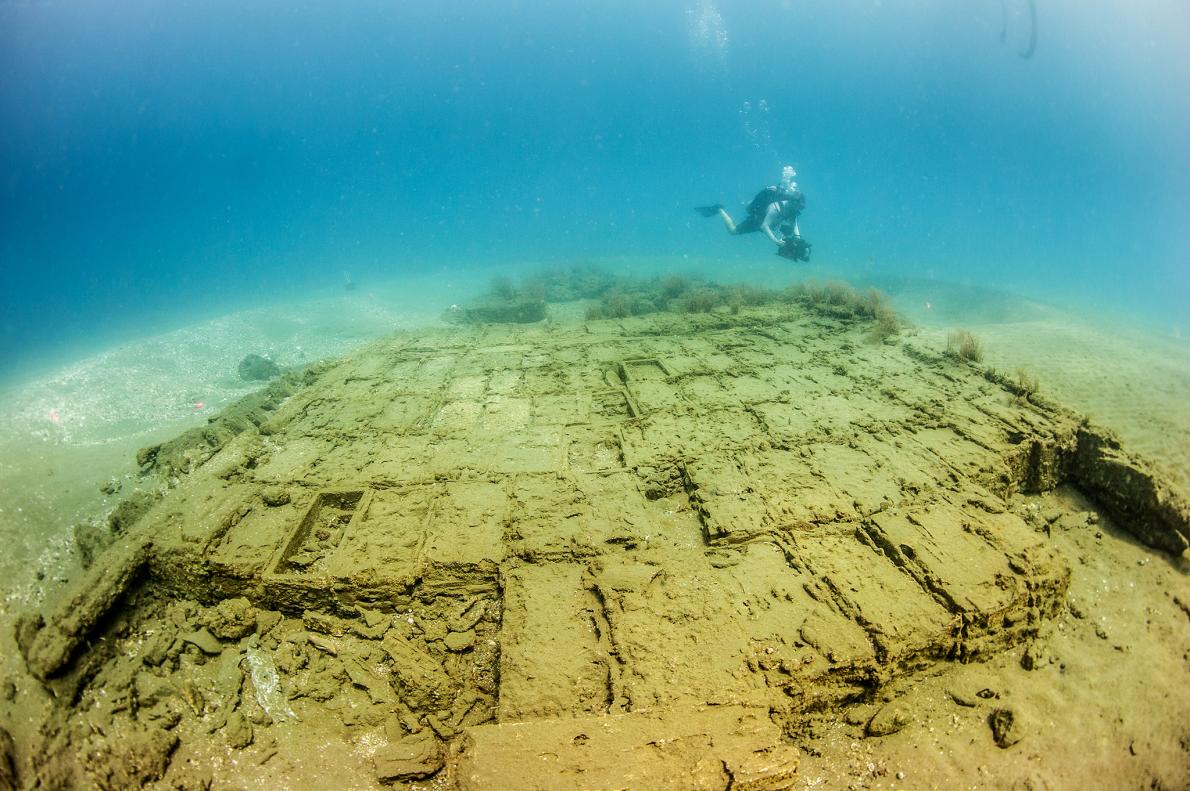 The cargo ship went down in 1681 with crates of swords, nails, and bolts of cloth.

“Archaeologists searching for real-life pirates of the Caribbean stumbled on a mysterious shipwreck in 2011. Now after years of historical detective work, they know what they discovered.

In 1681, the Spanish merchant ship Encarnación sank during a storm near the mouth of the Chagres River on the Caribbean side of Panama. Built in Veracruz, Mexico, the cargo vessel was part of the Tierra Firme fleet, the economic lifeline of 17th-century Spain.

Though it sank in less than 40 feet of water, the Encarnación somehow escaped major looting and is surprisingly well-preserved, with the bottom half of its hull intact thanks to burial in the seafloor. (Learn about a cursed warship that’s also been stunningly well preserved.)

The Encarnación gives a rare glimpse of a major shift in world history during the colonial era, says Filipe Castro, a nautical archaeologist at Texas A&M University. “It is the rise of capitalism, imperialism, rationalism, and the middle classes that are going to buy art and consume literature.”

At the time, gold and silver mines in Mexico and Peru fed the ambitions and coffers of Spain’s royal family. To transport the wealth of the New World to Europe, Spanish colonists built fleets of merchant vessels that were escorted by armed galleons and warships, explains Fritz Hanselmann, an underwater archaeologist at Texas State University.

After delivering their treasures to Spain, the fleets would turn around and, laden with European goods, hopscotch throughout the Spanish colonies selling their cargo.

Spain’s two main fleets, the Tierra Firme and the New Spain, serviced Central and South America and Mexico, respectively. “These ships were the backbone of the Spanish colonies,” says Hanselmann, who is part of the team studying the Encarnación.
Oceanic Lifeblood

The Encarnación is one of about 16 Spanish shipwrecks discovered in the Americas, says Jennifer McKinnon, a maritime archaeologist at East Carolina University who is not involved in the study. But nearly all the wrecks found to date have been heavily looted. Ocean bacteria and shipworms that feed on exposed wood usually consume what looters miss.

A photo mosaic shows the hull of the Encarnación, lying in 32 feet of water off Panama’s coast.
Photograph by Jonathan Kingston, National Geographic Creative

To find a wreck with much of its cargo still onboard, as well as part of its hull intact, can provide a wealth of new knowledge. “Ships that were built hundreds of years ago didn’t come with blueprints,” Hanselmann says. Studying the Encarnación’s hull has already helped reveal how these vessels were constructed.

An initial examination revealed the use of a material called granel, a kind of permanent ballast, says Chris Horrell, a maritime archaeologist working with Hanselmann. It’s “basically a cement consisting of sand, lime, and pebbles,” he explains, that shipbuilders used to coat a ship’s hull with a thin veneer.

Researchers think granel stabilized ships and was also used as a construction material for buildings throughout the New World. Horrell is not yet sure whether granel was a New World invention or an Old World import, but finding out is part of his research agenda.
An Accidental Find

Hanselmann and colleagues didn’t set out to find the Encarnación. They were looking instead for ships belonging to the notorious English privateer and pirate Captain Henry Morgan, a legendary figure who at the height of his power commanded a fleet of 36 ships and more than a thousand men.
Picture of 17th-century lead cargo seals found on a shipwreck in Panama

Lead seals recovered from the Encarnación. These seals were usually used to secure bolts of fabric for transport.
Photograph by Jonathan Kingston, National Geographic Creative

In 1670, 11 years before the Encarnación went down, Morgan was on his way to sack Panama City when a storm sank five of his ships at the mouth of the Chagres River. Hanselmann and his team were searching for those ships when they found a surprise.

Sensors that detect magnetic anomalies alerted the researchers to the presence of metal objects about 0.6 miles (a kilometer) from the mouth of the river. Divers sent to investigate discovered a shipwreck loaded with cargo—an indication that it probably wasn’t one of Morgan’s ships. “If he’s en route to sack a city, his holds aren’t going to be full,” says Hanselmann.

Further investigation revealed a merchant ship instead. “These ships were the ones the privateers were always after,” says Hanselmann.

The Encarnación didn’t carry flashy cargo like gold coins or silver cups, says Horrell. But its workaday materials were valuable—both to pirates and now to archaeologists.”

“Underwater archaeologists have solved the mystery of a shipwreck filled with sword blades, scissors and mule shoes more than three years after finding it in the waters off the Caribbean coast of Panama.

The vessel has been identified as the Nuestra Señora de Encarnación, a colonial Spanish ship known as a nao, or merchant ship, that sank in 1681 during a storm at the mouth of Panama’s Chagres River.

“This truly is an exciting and intriguing shipwreck,” said project director Frederick “Fritz” Hanselmann, the project director and underwater archaeologist at the Meadows Center for Water and the Environment at Texas State University.

Very few Spanish merchant naos have ever been found, and even fewer have been unearthed in the Encarnacións’s amazing condition.

Resting at a depth of just 40 feet, the 334-year-old wreck is buried in up to 3 feet of muddy sand and silt that preserved the entire lower portion of the ship’s hull.

One of Spain’s great treasure convoys, the Tierra Firme left Spain for the New World every year carrying supplies for the colonists and returning with precious metals, emeralds and pearls. The trade was the backbone of Spain’s colonial economy.

Hanselmann and colleagues stumbled upon the vessel in 2011, during their ongoing search for five ships the 17th century pirate Captain Henry Morgan lost en route to sacking Panama City in 1671. A year before, the team recovered guns that were lost overboard when Morgan’s ships ran aground.

The researchers have no doubt the wreck is the Encarnación.

“The location of the ship is consistent with the story of the wrecking event. The only other vessel that went down immediately after that storm in that location was a small salvage barge. This is no barge,” Hanselmann told Discovery News.

He noted that three other vessels were lost during that storm, but closer to Portobelo.

“Other than the loss of Morgan’s ships in this area 10 years prior, there are no other contemporaneous accounts of Spanish merchant vessel losses off the Chagres,” he said.

According to maritime archaeologist and assistant project director Melanie Damour, the vessel’s construction matches the information currently available on Encarnación.

“We have a substantial amount of preserved hull structure and our measurements are fairly consistent with the construction details we have found so far. In addition, we know that Encarnación was constructed of mahogany and oak, both of which we documented,” Damour said.

Moreover, Encarnación’s cargo manifest matches what has been found in the archaeological record so far.

The ship sank with barrels and wooden boxes filled with swords, mule shoes, tacks, cloth roles, and lead bale seals with inscriptions. Apart from perishable organic material, the items are still in place.

“The contemporary salvage attempts after the wrecking event were mostly unsuccessful as the only thing they could recover was a few bales of cloths,” Chris Horrell, maritime archaeologist and assistant project director, told Discovery News.

Hanselmann noted a certain duality in most of the cargo. The objects themselves provide a snapshot of colonial Spanish life in late 17th century.

“Sword blades, scissors and mule shoes were very common items that had multiple uses and were employed in everyday life,” he said.

“The sword blade could serve as a weapon of the Crown’s soldiers, but could also be utilized for everyday cutting needs. The scissors that could assist in treating wounds would also have other uses in other professions. The mule shoes were necessary not only for transporting silver and gold across the isthmus, but transporting goods and merchandise from one town to the next,” he added.

According to the researchers, the area where the Encarnación lies may and hold up to 30 shipwrecks.

“The waters surrounding the mouth of the Chagres River and further along the Caribbean coast of Panama hold more than 500 years of storied maritime history,” Hanselmann said.

“The search for Morgan’s lost ships will continue and who knows what else we will discover along the way,” he added.”