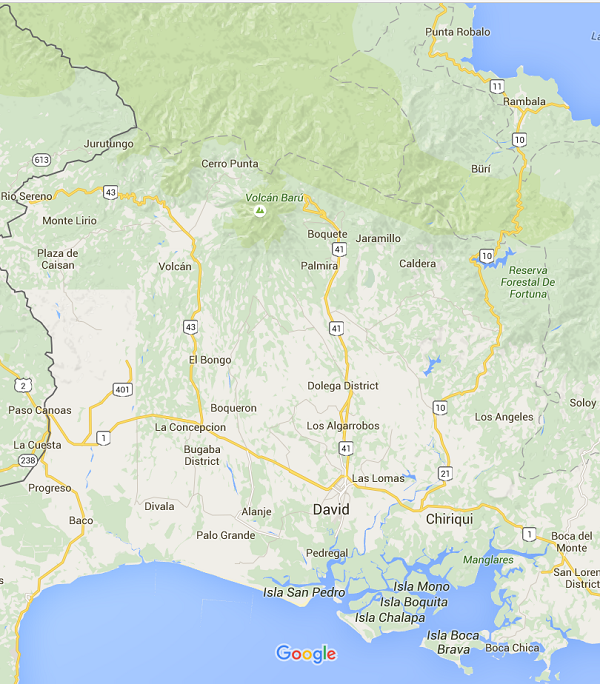 Nearly a decade ago, it was announced that a road would be built between Boquete and Volcan.  The original “Ruta Sur” was to go through Palmira into Potrerrillos Arriba and then to the main road and on to Volcan.  The work began and an impressive new paved route wound its way past Boquete Country Club well into Palmira.

Then something changed.  The crews left, seemingly abruptly.  The road ended in what appeared to be an arbitrary spot as it was just about to close in on Potrerillos.    Meanwhile work began on what was to become the actualized Ruta Sur, an even more substantial roadway with its entry much further South.

The new road’s entrance was now in Dolega about half way between Boquete and David.  The changed location was a disappointment for many Boquetenos but still a valued new transit option.

So we had our Ruta Sur…. just not the one we expected.  And it reduced travel time between Volcan and Boquete from an hour and forty-five minutes to an hour and fifteen minutes – a half hour saved.  So much better, but it did not provide an important side benefit we all anticipated… a direct connection between Boquete and Potrerillos Arriba opening both regions to each other along with a potentially more convenient route to Volcan.

Well, the new package of road investment reportedly includes the completion of this original ruta sur between Palmira and Potrerillos.  We are hopeful that this time, the road will go through.  According to the report below, they only need to complete 9 kilometers to make the connection.

Expect a lot of attention directed to parts of Palmira and Potrerillos when the project is actually reengaged.  In the meantime, the other Ruta Sur and other regional roadways will also see substantial improvement in this package of Chiriqui infrastructure investment.  This comes as the expansion of the Pan American highway in Chiriqui is nearing completion.

So much new connectivity between the highland towns of Chiriqui and throughout the Province will add quality of life for all.  Tourists and residents will find transit much quicker.  Investors and property owners are likely to benefit as well.

Lots of additional investments of interest below including reforestation, other road works, University expansion, housing, sanitation, water, and agriculture promotion.

“The Cabinet Council announced today the rehabilitation of about 130 kilometers of road in the districts of Renacimiento and Bugaba, in the province of Chiriquí, as part of the development plan between the local authorities and the Government.

The Minister of Public Works, Ramón Arosemena, he reported that soon will begin the analyzes for the widening of the road Concepción – Volcán, with an extension of 33 kilometers, which will benefit more than 40 thousand inhabitants of the region.

The institution will start the studies and analysis to define costs and to raise the tender documentation for this project that will benefit, not only Cerro Punta and Volcán, but also the district of Renacimiento”, said Arosemena during the Cabinet Council held at the Centro Básico General Nueva California, in the corregimiento of Volcán, district of Bugaba.

Arosemena also detailed that other internal roads will be rehabilitated which will help the productive sector of the province of Chiriqui, as:  the road San Andrés-Dominical-Caizán-Monte Lirio, with an extension of 50 kilometers: the road Palmira – Potrerillo – Vía Azul (Boquete a Volcán), with a range of 9 kilometers.  In addition 30 kilometers will be improved in the district of Bugaba.”

Expansion of the AUCHI

The Cabinet endorsed the acquisition of land for the Autonomous University of Chiriquí (AUCHI), for the sum of 3.5 million balboas, to expand the existing 14 hectares and comply with a higher academic offer in the region.

In the area of Health, the Minister, Francisco Javier Terrientes, explained that with the extension of the hours of the installations of the Ministry of Health (Minsa), have benefited more than 20,470 residents of Renacimiento, Rio Sereno, Volcán, Paso Canoas, among others.

Additionally, Minsa signed Agreement electronic SEIS Record, which will benefit 12,717 inhabitants of 39 communities of Volcán surrounding areas. Equally, inaugurated the Colposcopy Unit and negotiated the purchase of an equipment of cryotherapy for women who present cervical pathologies.

Public works in the region

Currently, in the province of Chiriquí more than 425 million balboas is invested in areas of health, education, housing, basic health, sports, social programs and others, of this amount more than 130 million balboas has been executed in the first three months of this year.

On the other hand, members of the Cabinet authorized the Ministry of Economy and Finance (MEF) to sign a capitalization agreement in order to increase the participation of the Republic of Panama in the equity of the Central American Bank of Economic Integration (BCIE), allowing the country to promote an agenda of financing public and private investment, through access to greater resources, and actively participate with a voice and vote in the decisions of the organism.

On the other hand, the Minister in charge of Economy and Finance, Eyda Varela de Chinchilla, presented the Medium Term Fiscal Framework 2017-2021, pursuant to article 18 of the Law 34 of 2008, better known as Social Fiscal Responsibility Law.

According to this new fiscal framework, the growth of the Panamanian economy projected for the five-year period 2017-2021 has an average annual rate of 6.3%, said Varela de Chinchilla.

The Minister of Housing and Land Management, Mario Etchelecu, stressed that to date there is a 20% advance in building 500 homes in the districts of Baru, Bugaba, Boqueron and Renacimiento, which were tendered in 2015.

A total of one thousand 500  homes in different sectors of the province of Chiriqui,  15 thousand homes of social interest that Miviot tendered through 22 public events last year.

Etchelecu announced that next May, 20 thousand homes will be tendered as part of the Techos de Esperanza project. Of this figure, 2,500 will be built in the Chiriquí province from May onwards.

The Director of the Institute of Aqueducts and Sewage Systems (Idaan), Julia Guardia explained the contemplated projects in the province, which amounted to 314.9 million balboas.

Meanwhile, the Director of the National Council of Sustainable Development (Conades), Manuel Soriano, said that the rural aqueducts projects in the Renacimiento District have a 45% progress, with an investment of 1 million 497 thousand balboas.

The Minister of the Environment, Mirei Endara, presented to the Cabinet projects on environmental issues that the institution advances in that province.

Endara referred to the Alliance for the Million Reforested Hectares, explaining that by this 2016, MYENVIRONMENT, through the investment program for the Restoration of Priority Hydrographic Basins (PROCUENCAS) and the Direction of Integrated Management of Hydrographic Basins (DIGICH), has as a goal in Chiriqui to reforest 2,194 hectares and produce 314,246 seedlings to reforest and restore forests in the province and move forward with the plan of greening Panama.

Promotion of the agricultural sector

For his part, the Minister of Agricultural Development, Jorge Arango Arias, presented the achievements of his institution in products in the western region of the country, such as meat, bovine milk, cocoa, vegetables, palm oil, banana and coffee, amongst others.

He added that the Ministry of Agricultural Development (MIDA), in conjunction with the Inter-American Institute for cooperation on Agriculture (IICA), seeks to implement a plan to benefit 15, 650 producers in the provinces of Bocas del Toro, Chiriqui and the Ngäbe Buglé region, creating 30 thousand jobs, doubling the production and generating currencies in the order of 500 million balboas.” 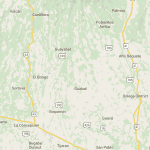 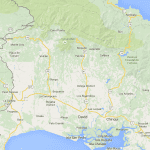