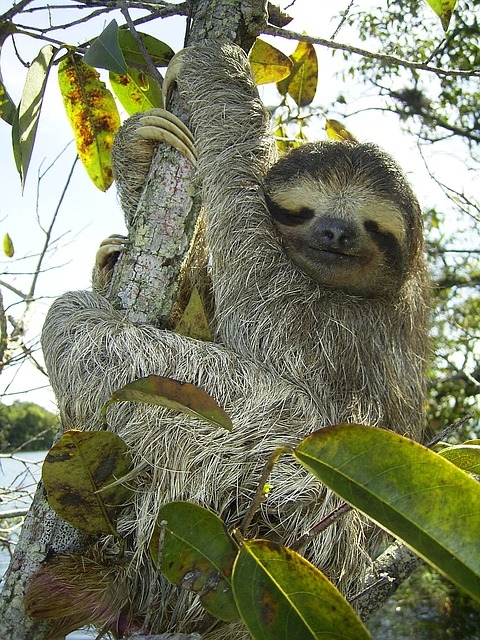 One of the joys of being in Panama is the incredible animal life.  Panama is full of natural wonders.  The incredible flora and fauna is a key reason so many people visit and decide to move here.

When you develop your new property or build your new house, please remember that you are in the middle of a natural treasure.  Please maintain as much of the natural environment as possible for the sake of your children and grandchildren.  Consider cultivating three trees for each one you remove and designating parts of your property for wildlife whenever possible.  The sloths and future generations thank you.

Pygmy three-toed sloths are perhaps not as lazy as their sloth image would tell us. Rather than loll around in the mangrove fringes of their one tiny island in the southern Caribbean, some of them have wandered inland. After learning this, scientists have located more Pygmy sloths and they likely total around 3,200 individuals, according to research done by Bryson Voirin, a former fellow at the Smithsonian Tropical Research Institute.

The sloths, Bradypus pygmaeus, live on Panama’s Escudo de Veraguas Island. Voirin says the previously underestimated population just shows how little is known about the species, and underscores the need to conserve the isolated home of this still-limited number of sloths.

Voirin’s research appears in the Journal of Mammalogy, showing that the sloths are less picky about habitat than previously thought, also inhabiting the forested interior of the island.

To conduct the research, Voirin placed radio collars on 10 sloths in mangroves, tracking them at three- to six-month intervals over three years. Five sloths moved into other tree species, and four moved more than 656 feet inland-running a sloth marathon, it seems. Voirin used population density estimates and extrapolated across the island’s 1062 acres to estimate the number of individuals, according to a release.

The sloth population still has plenty of local threats, however–including timber harvesting and intended large-scale development on the island.

“Declaring the island a wildlife refuge or national park would protect not only the pygmy sloths, but also the other unique species found on the island,” said Voirin, in a release. Endemic hummingbird species and an endemic bat species also live on the island. Its beaches are important for nesting sea turtles and its flora remains understudied. Currently, the island falls under jurisdiction of the indigenous territory of Ngäbe-Buglé Comarca, a release confirmed.

Voirin, who is now a researcher at Germany’s Max Planck Institute of Ornithology, hopes others will continue researching the sloths.”Further scientific research on the pygmy three-toed sloth is much needed, and we hope we will continue to yield new insights into its life history,” Voirin said in a release. “Such research will not only help us to better understand the species, but will enable us to ensure that it persists into the future.”