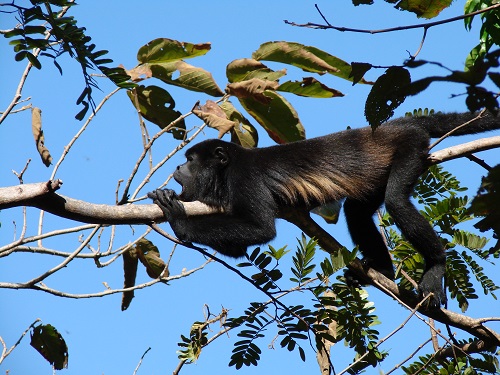 Amazing. It comes as welcome news that so many animals displaced by the expansion are being relocated. A huge project like the canal expansion unfortunately equals habitat destruction. If this report is representative of what’s really happening, then there is an impressive good faith effort underway to mitigate that impact.

Rescue efforts ensure that rare animals and plants are not sacrificed in the Panama Canal expansion.

ROCKS and earth aren’t the only things being moved around during the Panama Canal expansion. Animals, birds and even a few insects – rare ones – have been trapped and relocated before the excavators and earth-moving equipment arrived.

Thousands of seedlings have also been planted in communities around Panama to take the place of trees that were felled to make way for bigger locks on both the Atlantic and Pacific, new access channels and other improvements as the canal updates to allow bigger ships to make the crossing.

The canal traverses some of the most biologically diverse territory in the Americas, but during its 1904-1914 construction, no such care was taken with the wildlife. It was hard enough keeping workers, who succumbed to tropical diseases by the thousands, alive.

Now, the Panama Canal Authority, co-ordinating with the National Environmental Authority, is working with several animal rescue contractors to move howler, squirrel and titi monkeys, sloths, crocodiles, snakes (venomous and not), amphibians, and more to new habitats where they can thrive. As of June, more than 5,800 creatures had been moved.

Sometimes, the animals can be tricky. One troop of nine monkeys on the Atlantic side defied capture for four months, preventing clearing, said Angel Tribaldos, a biologist who works as an environmental specialist for the canal authority. They eventually decided to decamp on their own and one morning, when workers arrived, they were gone.

An elusive female crocodile on the Atlantic side foiled rescuers for eight months before she was finally spotted in the grass at 6am. After a rescue team was alerted, it took four hours to tranquilise the 5.25m creature and immobilise her so she could be put into a truck and moved to her new home in the San Lorenzo National Forest.

Before the rescue programme began, the expansion project was divided into several areas and wildlife in each area surveyed. First, there are 10 days of trapping before any vegetation is cleared.

During the first cutting, crews use chain saws and no large machinery is permitted. If clearing crews spot wildlife in trees or nests, they are instructed to call a fauna rescue team because they don’t want to cut a tree and risk injury to a falling animal.

There have been holdouts, said Hortensia Broce, who works on the canal authority’s environmental programmes.

Three monkeys of different species were holed up in the last tree on one tract of land and rescue workers just waited until they finally decided to come down.

“On an island in Gatun Lake, we also had a monkey who became very wise,” Broce said. “He would go into the forest and steal the lunches of the workers.”

Even a few interesting species of insects, including Hercules beetles that are sometimes more than 15cm long, have been relocated. “Normally, the insects that are captured are released nearby and not moved to national parks,” Tribaldos said.

Reptiles with 2,743 rescues, followed by mammals at 2,309 top the list of creatures that have been trapped. Just 227 birds have been relocated. Ill or injured animals go to a halfway house until they are well enough to be moved. So far, 61 animals have died – less than 1% of the animals that have been trapped – in the rescue area. Eight of them were killed by coyotes, Broce said.

“The coyotes are advancing from North America,” she said. “It’s an invasion.”

Because they are considered a nuisance and a threat to chickens and other farm animals, it’s up to the coyotes to fend for themselves and they aren’t among the species being relocated, Broce said.

Meanwhile, with most of the canal excavation work done, animal rescue teams are turning their attention to trapping creatures near the sites of 80 new signal towers that will help keep vessels in the middle of the canal.

Environmental efforts at the canal expansion go beyond relocating fauna. Researchers determined that 494ha containing trees that had grown since original canal construction would have to be cut and replaced.

But, the forest isn’t being replaced tree for tree, Broce said. Instead, for each hectare of vegetation and trees that are cut, 2ha must be reforested in protected areas, such as national parks and nature preserves.

Local communities, some quite distant from the canal, help with seedling projects and maintain the nurseries.

“This way you can bring the benefits of the canal to other areas of the country,” Broce said. “We also found that if communities are involved, they’re less likely to burn the forest for charcoal or cut it.”

Cutting an oak, wild cashew, jobo, yellow poui or cedar tree doesn’t necessarily mean it will get replaced with the same kind of tree, Broce said. Species native to each reforestation area are selected because they have the best chance of surviving.

There was one exception, however. Panama’s Aquatic Resources Authority required mangroves cut from the area of the new Pacific locks to be replaced with mangroves. In the beginning, crabs ate the roots of the new plantings.

“We learned to put the mangrove seedlings inside bamboo shoots that protected them until they got bigger,” Broce said. “Eventually, the bamboo just dies off.”

Most of the newly-reforested areas are distant from the Panama Canal watershed, where there has been a reforesting programme for many years. 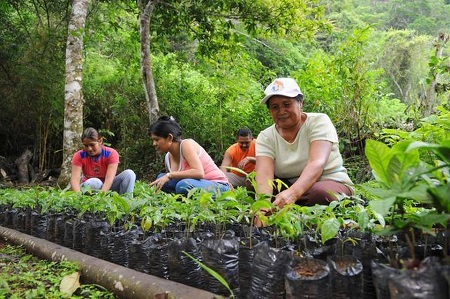 Reforestation not only helps with creating a habitat for wildlife and carbon sequestration, but also has another important goal. Most of the water needed to operate the locks – 236 million litres for each ship transit – comes from artificially created Gatun Lake, which also supplies water for Panama City and other communities.

When water levels in the lake are low, transits may have to be limited or ships’ loads reduced. By reforesting, the canal authority aims to slow down how quickly water arrives at the lake “to enhance dry season water flows,” says Charles Perrings, an Arizona State University professor.

Canal officials are also addressing water issues with water-saving basins at the new locks. They’re designed to recycle about 60% of the water used for each ship transit. Even though the new locks are bigger, they’ll use about 7% less water than the current locks. The canal expansion, which has a target completion date of December 2015, enables the canal to handle ships that can be loaded with three times as many containers as those currently crossing the canal. Hence, enough water for the canal to operate at full capacity is critical.

“They do need to get it right. Reforestation will be part of the solution, but not all of it,” Perrings said. “It’s not a one-size -fits-all solution.”

There’s been low rainfall in Panama in the past year and the levels of Gatun and Alajuela lakes have fallen. “Do we have a water problem right now? No. But we know El Nino (that potentially causes drought in Panama) is coming,” said engineer Luis Ferreira, a spokesman for the expansion project. “We hope it will not hit us as hard as South America. We hope it rains.” — The Miami Herald/McClatchy Trubune Information Services