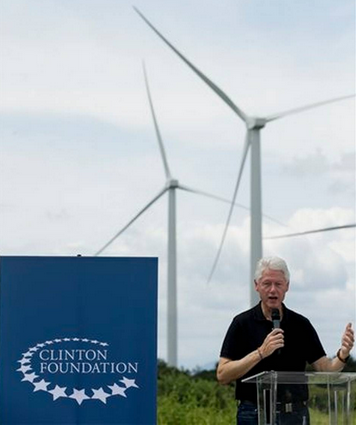 Panama has taken a big step forward with this $570 million project.  Panama’s rapid growth is coupled with increased power demands.  In a small country like Panama, one large wind farm can provide an impressive percentage of total energy needs.   But, with Panama’s sizzling economy, it is estimated that $3 billion more will be spent in Panama on energy generation projects over the next 10 years.

Until the potential blessing of fusion power is realized, clean energy sources like this one will become increasingly critical world-wide.  With hydro becoming a politically charged subject in Panama, expect to see more wind and other projects like this one in the future.

Former U.S. President Bill Clinton is talking up the potential of renewable energy to shield developing countries from the effects of climate change.

Clinton visited Central America’s biggest wind farm Tuesday. The electricity project in western Panama is scheduled to open next year with the capacity to produce about 6 percent to 8 percent of Panama’s energy needs.

The Clinton Global Initiative has provided support to the project, which was started in 2012 by a private equity firm with energy investments in Latin America.”

The largest wind farm in Central America, located 150 kilometers east of the capital, will be inaugurated today after concluding its third phase, which completes a generating capacity of 270 megawatts (MW) of clean energy.

After the investment of 570 million dollars, 108 wind turbines were installed, which produce between six and seven percent of the country’s electricity demand, the equivalent to the consumption of about 100,000 families, according the newspaper La Estrella.

The Wind Farm Penonomé, in the central province of Coclé, includes a fourth phase that will raise its potential to 337 MW and responds to the nation’s policy to increase the use of renewable energies like wind and solar, to limit the dependence on hydro and thermal, the source said.

The use of wind for these purposes will be extended, and for 2016 Panama could have 400 MW of installed potential, which would cover almost a quarter of the needs of the nation, authorities declared.

Experts say that wind turbines require an investment of about 1.5 million dollars per MW, half the cost in hydropower plants.

The Panamanian wind farm could be placed this Tuesday in 13th place in the world for its potential, preceded by another ten in the United States, one in Britain and one in Belgium, according to the German digital site All Rankings.

The greatest investor of the Penonomé wind farm is InterEnergy Holdings, a transnational dedicated to clean energies in Dominican Republic, Jamaica, Chile and Panama.

The introduction of wind energy will allow Panama to avoid the emission of approximately 450,000 tons of carbon into the environment and it will mitigate the emission of another thousands of nitrogen oxide and 500 of sulfur dioxide, assured the Panama Wind Union, the consortium operating the facility .

The country’s energy matrix depends highly on thermal plants, highly polluting, and the hydroelectric plants, that besides the damage to the environment by its installation, work in an unstable way in dry periods.

Panama is one of the fastest growing economies in Latin America, but fell behind in infrastructure to increase the generation and transmission of energy.

The Panamanian government estimates that the country’s demand will grow at a rate of eight percent each year, which requires an investment of around three billion dollars in the next decade to meet the needs.

In late 2014, the global capacity of energy produced by wind turbines increased to 370 gigawatts, the five per cent of electricity consumption, and Denmark set the pace in this regard when covered a quarter of its demand and 21 percent in the case of Spain.”

Casa Solution announcement of the project in prior post 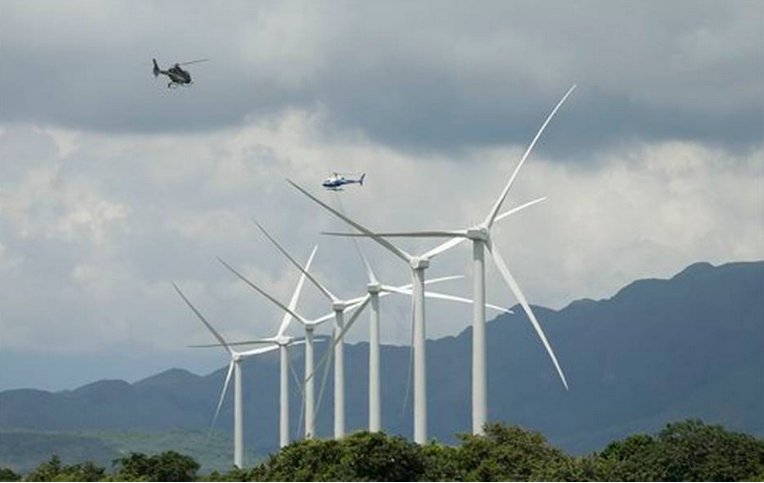