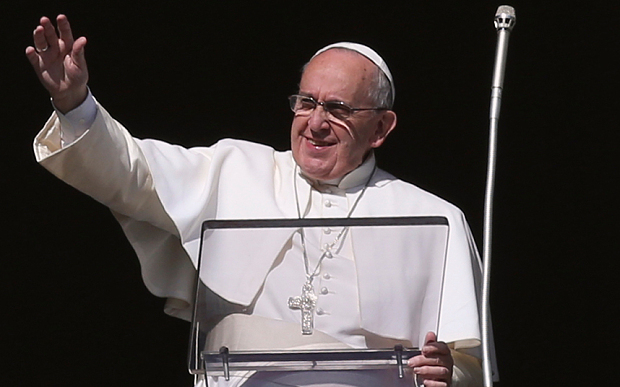 “Pope Francis has put his stamp firmly on the Roman Catholic Church by naming 20 new cardinals from countries as diverse as Ethiopia, Vietnam and Panama” – UK Telegraph

Another impressive step by the new Pope.  His warmth and progressive statements are making waves and winning hearts.

For a small city like David to have a Catholic Cardinal is amazing.  This Bishop is considered extremely charismatic and much loved in David.

Bishop learns of his elevation to cardinal via WhatsApp

Panama bishop received news of his appointment on his smartphone

A Panamanian bishop learned of his elevation to cardinal via the instant messaging service WhatsApp.

Cardinal-designate José Luis Lacunza Maestrojuán of David in the west of Panama learned of his elevation to cardinal via his smartphone. His sister, living in Spain, sent him a short message asking, “You have nothing to tell me? The Pope has made new announcements. This doesn’t affect you?” the Spanish website teinteresa.es reported.

Cardinal-designate Lacunza confessed he considered the idea of being elevated to cardinal “crazy”, though a congratulatory phone call from Nicaraguan Cardinal Leopoldo Brenes Solorzano of Managua made him think the message was real.

Like most of the 20 new cardinals Pope Francis named on January 4 , the news of his elevation came as a surprise. And like many of the others who will be elevated into the College of Cardinals on February 14, he has worked in one of the world’s more peripheral regions and focused heavily on social matters.

Journalist Eunice Meneses, who works in the Archdiocese of Panama City, said: “He is recognised (in Panama) because he has been a bishop very close to and very sensitive to social subjects. He has been a mediator in conflicts.”

Cardinal-designate Lacunza, a member of the Augustinian Recollects, has led the Diocese of David, in an agricultural region near the border with Costa Rica, since 1999. There, he has mediated conflicts among indigenous groups trying to protect their traditional lands against activities such as mining.

He was awarded an honorary degree from a local university in a 2012 for his work mediating a dispute, which had turned violent, between the Ngabe-Bugle peoples and the government over mining concessions on indigenous reserves.

In accepting the honor, Cardinal-designate Lacunza said his mission was “to work among the poor, with the poorest, that is, the indigenous people of the Ngabe-Bugle region,” according to the Augustinian Recollects’ website. The people there, he added, “have been forgotten for years, and they need to have their basic problems resolved”.

The cardinal-designate called the degree “an undeserved recognition for a person with so many faults and errors”.

Cardinal-designate Lacunza was born in Pamplona, Spain in 1944. He became a priest in 1969 and was sent to Panama by the Augustinian Recollects shortly thereafter.

Here’s the announcement in UK Telegraph

And here in USA Today