“This Might be Frank Gehry’s Craziest Building Yet” – Fast Company 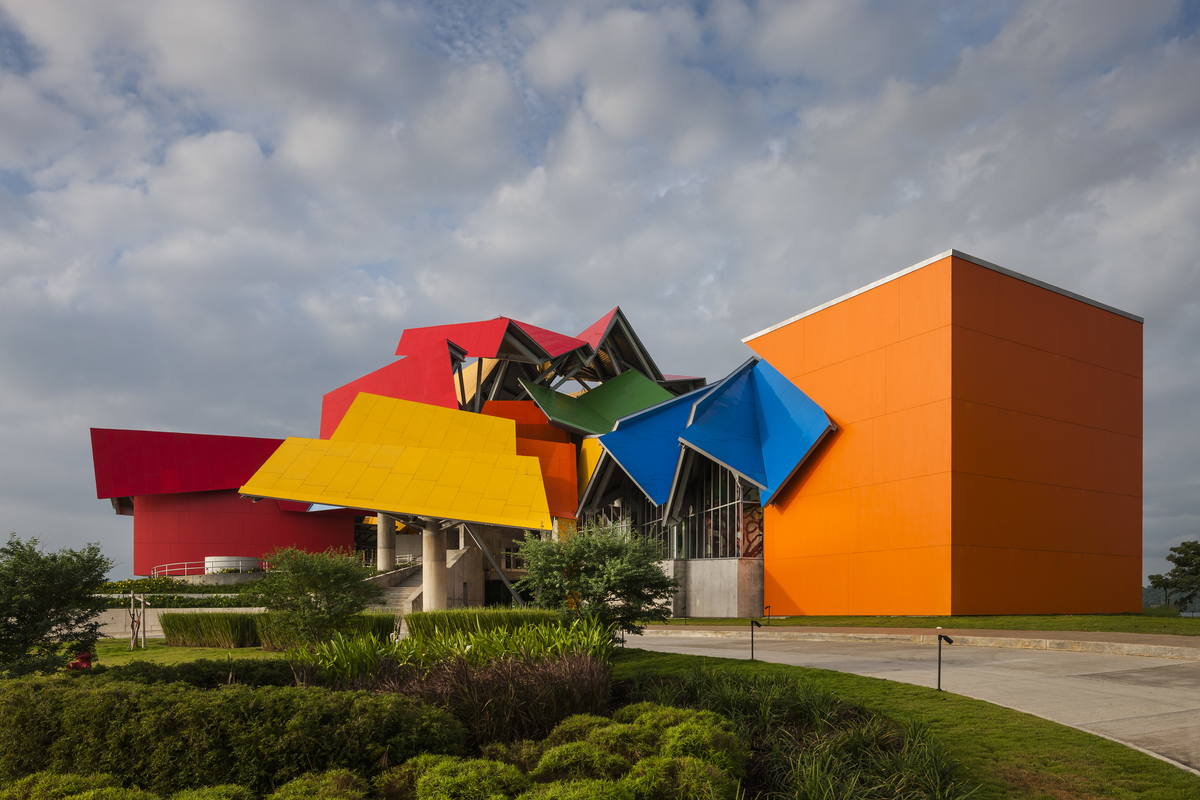 This really wild-looking museum on the Amador Causeway in Panama City is another feather in Panama’s hat.  It’s due to open next week on October 2, 2014.  As a narrow land-bridge between North and South America Panama has been blessed with astonishing wildlife diversity.  This new attraction honors that distinction as well as provides another high-profile stop for Panama’s enormous tourist trade.

Note the Smithsonian affiliation.  The Smithsonian has long been extremely active in Panama with research stations throughout the country.   A very popular destination (advanced reservations needed) is Barro Colorado accessible from the  Gamboa Rainforest Resort area not far from Panama City. Here’s the Smithsonian Tropical Research Institute link.

“This Might be Frank Gehry’s Craziest Building Yet” – Fast Company, Shaunacy Ferro, 9/19/14

“Frank Gehry’s first foray into Latin American architecture basically looks like a box of crayons exploded on the shore of the Panama Bay. In a good way. The 44,000-square-foot Biomuseo, a Smithsonian-affiliated institution located on the waterfront in Panama City, pays tribute to the region’s ecosystem with an eye-popping mishmash of orange, yellow, blue, and green panels–perfect for a museum that’s all about celebrating biodiversity.

The Biomuseo, located at the Pacific end of the Panama Canal, tells the story of the geological origin of the Panamanian isthmus and how it has impacted the world’s biodiversity. Over the course of the millions of years it has existed, the isthmus has had a profound effect on the biodiversity of our world, as the land bridge that formed when the two continents slowly collided with each other allowed animals and plants to migrate between North and South America.

In form, the Biomuseo is not so different from another recently opened Gehry museum, the Parisian art center of Fondation Louis Vuitton, covered by a series of sail-like panels of different shapes and sizes. Here, though, Gehry refrained from dousing the building in his signature silvery sheen.

Instead, he incorporated bright colors that fit naturally into the Latin American context (and probably won’t cause any shine-related lawsuits). The designer was inspired by the tin roofs and colorful buildings of local Panamanian architecture. As a bonus, the metal canopies provide protection from the area’s frequent windy rains, sheltering an outdoor atrium that has views of Panama City and the Panama Canal. The building opens up to Biodiversity Park, an outdoor botanical garden with a selection of native plants, where people can explore hands-on the very biodiversity the museum seeks to explain.

The Biomuseo is set to open on October 2.”

More photos and info at:

“This Might be Frank Gehry’s Craziest Building Yet” – Fast Company, Shaunacy Ferro, 9/19/14 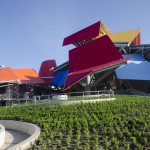 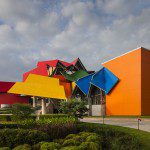 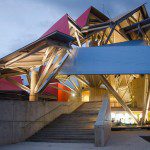 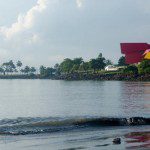